This is a series of updates by Dr. Rohan Bandi (MDS) Prosthodontist, Mumbai on the emerging lines of evidence on B.1.617.2, the Indian variant of SARS-CoV-2. Part 2 of the series describes the basics of B.1.617 and clarifies the different terms used in the description of variants, especially the Indian variants.

What are ‘variants,’ ‘mutations,’ and ‘lineages’? 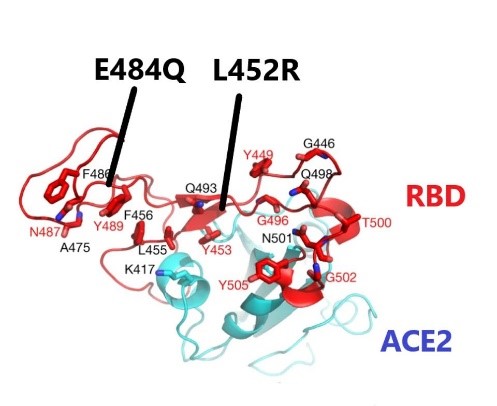 All viruses mutate as they replicate, as a part of natural processes — a mutation occurs when there is an ‘error’ or change in the RNA sequence of the virus as it replicates. Some viruses mutate faster than others, such as the influenza virus.

Descriptions of mutations show which nucleotide or amino acid is changing at what position in the sequence. For example, the E484Q mutation affects the spike protein of the SARS-CoV-2 virus in a way where the amino acid ‘E’ (glutamic acid) is replaced by the ‘Q’ (glutamine) at the 484th position.

As a virus mutates, it can sometimes retain some mutations while also giving rise to more along the way and retaining those. Multiple mutations that spread persistently give rise to a new ‘variant’ of the virus, such as the India variant or the UK variant, also called ‘lineages.’ 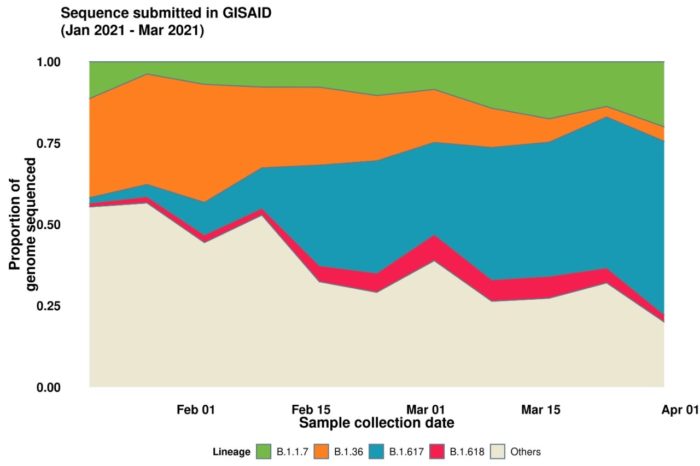 Some of these variants carry mutations that can escape detection by the immune system and neutralize antibodies, spread faster, or infect more, causing severe disease or a combination of these three behaviors. When variants ‘under investigation or interest’ acquire mutations that demonstrate any of these behaviors, they are designated as ‘variants of concern.’

The Indian ‘double mutant’ variant carries two important mutations: L452R and E484Q - both of which are associated with evading the immune system. Furthermore, the L452R mutation has been associated with a rapid spread of cases. The variant is most likely to be the leading cause behind the sudden and staggering growth in numbers being witnessed in India. 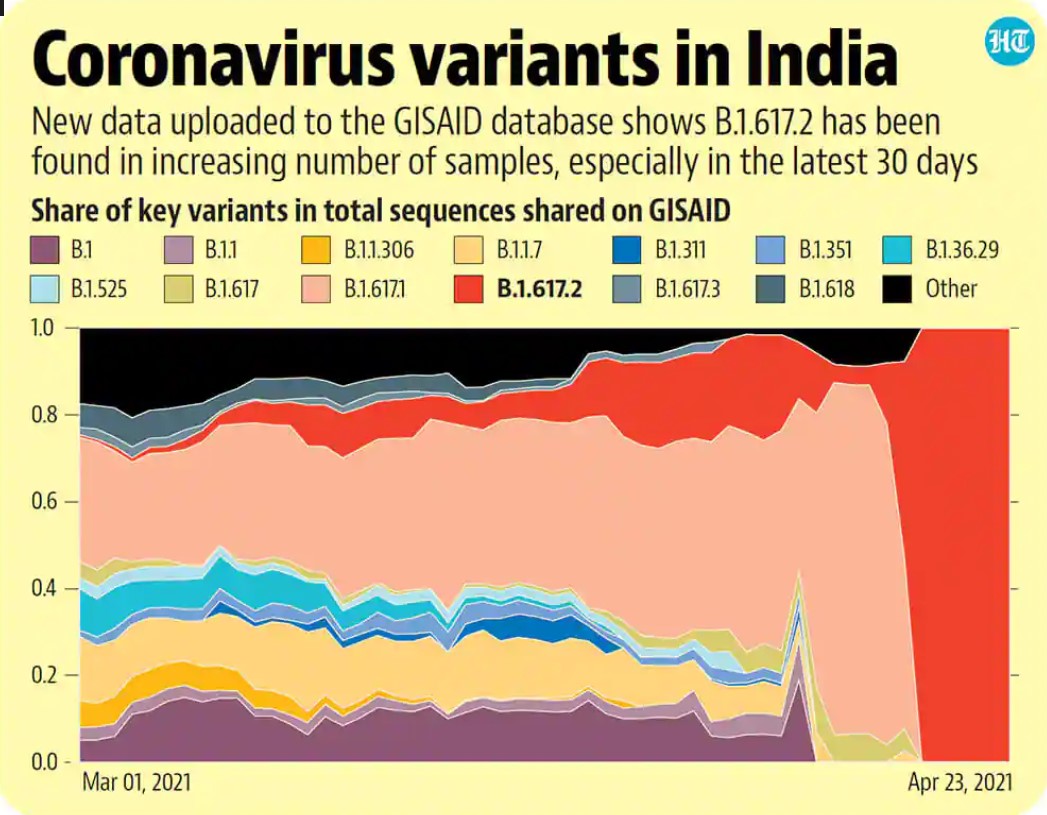 The B.1.617 variant also carries another notable mutation, P681R, misidentified in some reports as P614R. However, the mutation is not new and has been a part of the variant for a while.

The ‘triple mutant’ descriptor came along because of a mutation of interest, V383L, now present on the spike protein. It is found primarily in samples sequenced from Maharashtra. With available data from other countries where it has been detected before, it does not seem to warrant much concern at the moment.

B. 1. 617. 2 has been marked as VOC in the UK currently as its numbers are rapidly rising 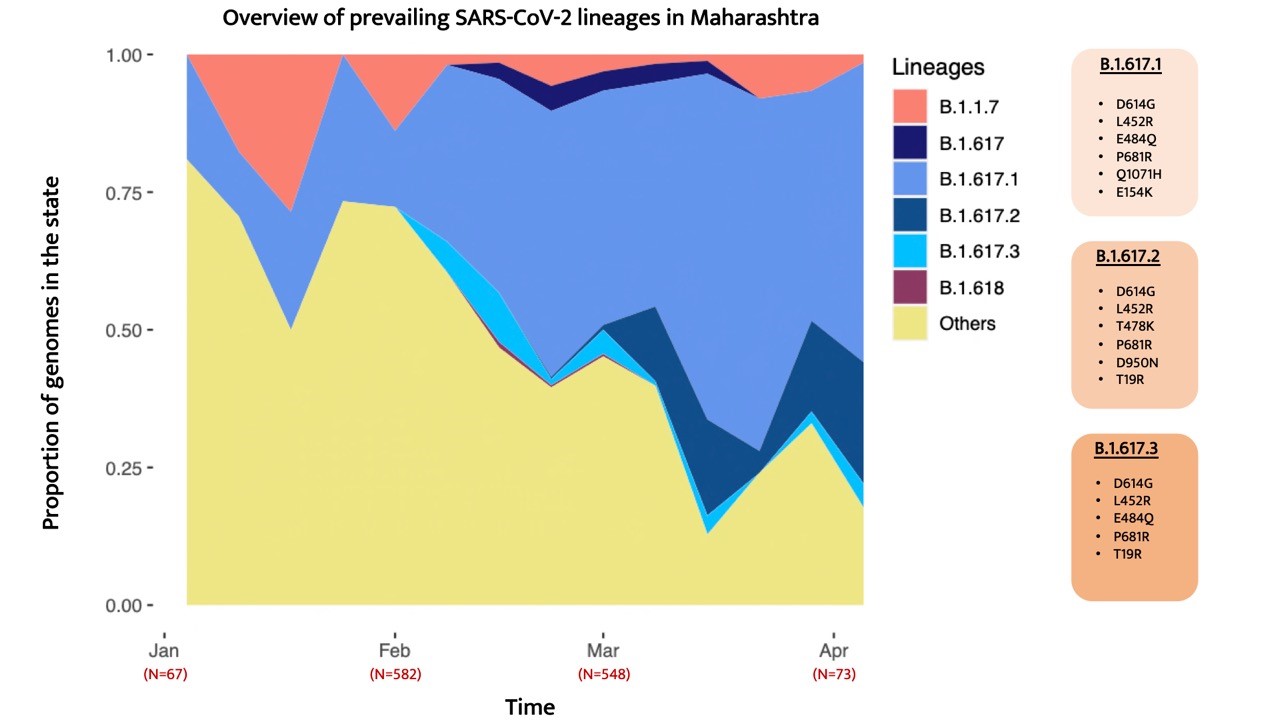 There is no scientific term such as “double” or “triple” mutation of the virus,” clarified a spokesperson for the science ministry. “The terms double or triple mutants are colloquial, and these are used to emphasize features of a variant. As used recently in various media reports, double or triple mutations were to signify the number of mutations that escape immunity (immune escape mutant). These variants otherwise harbor 15 lineage defining mutations.”

Additionally, all variants around the world carry multiple mutations — many more than three.

India is also witnessing the rise of another ‘variant of interest,’ called the B.1.618, which is currently spreading rapidly in West Bengal.

It carries a different set of mutations to the ‘double mutant.’

The B.1.618 is characterized by E484K (which virologists informally call ‘Eek’), a primary immune-escape mutation. It also carries two ‘deletions’ in its spike protein, called H146del and Y145del. Both these have been associated with immune escape as well. The variant carries other modifications not associated with the spike protein too.

Additionally, all variants around the world carry multiple mutations — many more than three.

This is a series of updates by Dr. Rohan Bandi, a prosthodontist from Mumbai, on the emerging updates on B.1.617.2 the Indian variant of SARS-CoV-2.

Several media reports have come up with scary headlines that the new SARS-CoV-2 variants are fooling the RT-PCR test, which is considered the gold standard ...

LEIPZIG, Germany: Researchers in India have found that scientific literature supports salivary diagnostics for SARS-CoV-2 infection as an alternative to ...

LEIPZIG, Germany: UK health authorities have administered the first doses of the SARS-CoV-2 vaccine developed by Pfizer and BioNTech, and public health ...

News Wed. 23 September 2020
Low genetic diversity of SARS-CoV-2 is its weakness. A single vaccine may cover all its variants

In this article, we analyze four recent articles published in Aug-Sept 2020 on the genetic diversity of SARS-CoV-2 and the potential therapeutic targets ...

News Tue. 4 May 2021
WHO statement on airborne transmission of SARS-CoV-2

The World Health Organization (WHO) updated its communication on the airborne transmission of SARS-CoV-2 on 30 April 2021. This article summarizes their ...

LEIPZIG, Germany: New variants of the SARS-CoV-2 virus that emerged in the UK and South Africa in 2020 show higher transmissibility. And whereas they are ...

The currently available SARS-CoV-2 antibody tests with their traditional serological approaches just tell us - yes or no, which has resulted in an ...

BANGKOK, Thailand: The Kingdom of Thailand wants to stimulate its economy by becoming an international hub for medical and dental treatment. A pilot ...

EDMONTON, Canada: A team of researchers at the University of Alberta has secured funding to develop a 3D ultrasound device that would allow dentists to ...

COPENHAGEN, Denmark: Typically, dental congresses provide an ideal platform for speakers to present and discuss some of their ...