WOHD 2020: Is it time for parents to get serious about sugar?

Back to news India
By FDI World Dental Federation
March 25, 2020

GENEVA, Switzerland: In light of World Oral Health Day (WOHD), which is being celebrated around the world today on 20 March 2020, FDI World Dental Federation released new statistics on the willingness of parents to limit their children’s sugar intake to ensure good oral health. The global survey, which was carried out by YouGov and commissioned by FDI, showed that less than half of parents proactively limit their children’s intake of sweets, carbonated soft drinks and juice as a means of protecting their teeth. 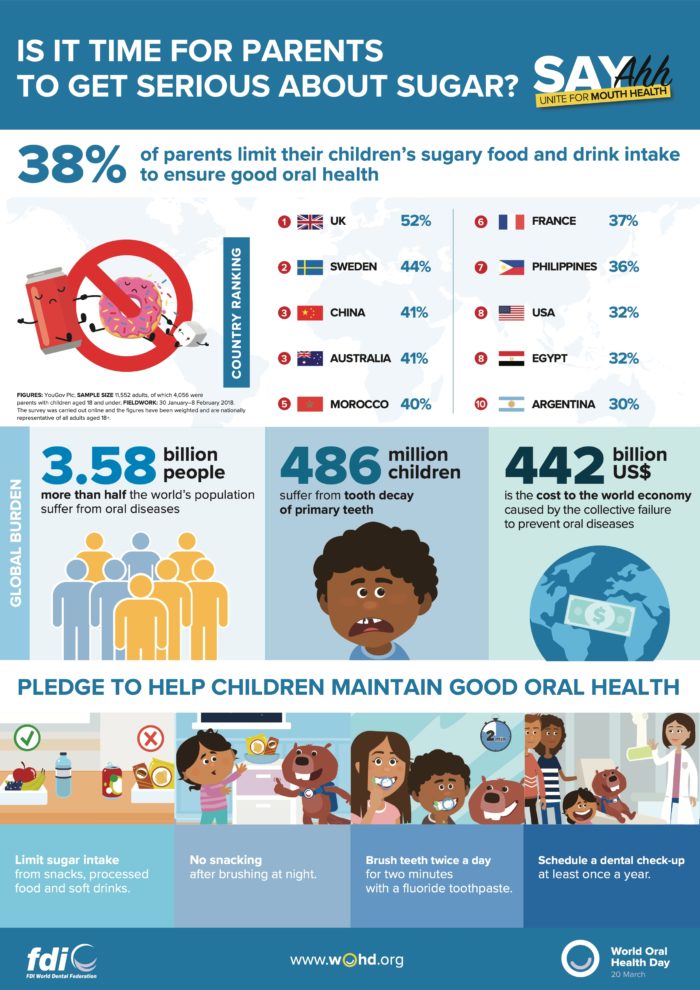 “Oral disease is a big part of a largely preventable disease burden, and these survey results demonstrate that we are just not doing enough to avoid oral health problems at an early age,” said Dr Gerhard K. Seeberger, president of FDI. “The oral health profession has largely existed as a separate specialty divorced from medicine and medicine’s education system, but the intense debate around sugar over the past few years only illustrates the fallacy of working in silos. It is simply unproductive to be discussing sugary drinks and their link to the obesity epidemic without factoring in the obvious impact they have on the oral health of children,” he continued.

Oral health continues to be one of the most neglected areas of global health. The tragedy is that oral disease is a silent epidemic afflicting some 3.58 billion people—more than half the world’s population—but it is largely preventable. Oral diseases, such as dental caries, periodontal disease and oral cancer, are the most common forms of preventable non-communicable diseases and affect people throughout their lifetimes, causing pain, discomfort, disfigurement and even death. The collective failure to prevent oral disease costs the world economy some €408 million ($442 billion).

Much of the neglect is down to one main barrier: high treatment costs. Oral diseases are the fourth most expensive out-of-pocket diseases to treat. Furthermore, political impetus to change this scenario has been largely absent, owing in part to the fact that, historically, the mouth has been treated separately from the body in healthcare policy-making.

One of the most critical questions the world is waiting for an answer is if the human body can mount a protective response that provides a lasting immunity against SARS-CoV-2. This understanding is crucial to the success of vaccines, the successful return of recovered patients to their pre-pandemic lifestyle, and also, how readily the world can overcome the fear of pandemic spread.

Corona- The Crown Jewel that can bring positive changes in the future of dentistry: Dr Biju Abraham

If one gives it a thought, COVID-19 is arm-twisting us into accepting a new normal. COVID-19 has indeed made us aware of the lacunae in the functioning of private dental setups, which need to be filled. Coronavirus, while being the reason behind almost all things bad in recent times, can also be the harbinger of a positive change in the field of dentistry.

The new CDC estimates for the severity, complications and deaths of COVID-19 bring down the numbers much lower making the overall scenario very optimistic. There is an ever-growing confusion between the two terms used for the death (fatality) rate. Read the addendum to understand the difference between the two numbers - CFR vs IFR. The original WHO numbers give an estimate of Case Fatality Rate (CFR). The new CDC numbers represent the Infection Fatality Rate (IFR).

COVID-19 is having an unprecedented impact on the global economy, including that of the dental industry. Most dental clinics are shut and a few are offering only the emergency services. Dr Bhavdeep Ahuja will analyse "the rising costs in the oral health care services and how to reboot and restart the dental clinics" in his 5 part series. "Changing Life Scenario in the Post COVID-19 Era" - is the first article of the series.