Three data-driven analyses on the pattern of COVID-19 pandemic and when it will probably end. (Photograph: Raphaël Dunant/Wikipedia)

Three data-driven analyses on the pattern of COVID-19 pandemic and when it will probably end.

Dental Tribune South Asia had published on 10th March 2020 - a report on Farr's law, which states that "epidemics tend to rise and fall in a roughly symmetrical pattern or bell-shaped curve." AIDS, SARS, Ebola — they all followed that pattern. That report was based on a study jointly published by Shanghai and Rutgers universities. With more and more data coming in, there are two more reports - one using simple statistical methods and the other using the SIR Model for Spread of Disease, The Differential Equation Model.

Dental Tribune South Asia had published on 10th March 2020 - a report on Farr's law, which states that "epidemics tend to rise and fall in a roughly symmetrical pattern or bell-shaped curve." AIDS, SARS, Ebola — they all followed that pattern. So does seasonal flu each year.

Farr's law - an often ignored law in ­every epidemic hysteria - may throw some light on the pattern of epidemics including that of coronavirus (COVID-19) that is turning into a pandemic. A group of researchers from Shanghai Jiao Tong University School of Medicine, China and Rutgers School of Public Health, NJ, USA have developed a model based on Farr's law using the data available on Feb. 8, 2020. They have analysed the data to predict the daily-incidence of 2019-nCoV infection in China, Hubei Province and Wuhan City afterwards. Will this model be accurate in predicting the rise and fall of Coronavirus (COVID-19)?

The study 'Trends and prediction in the daily incidence of novel coronavirus infection in China, Hubei Province and Wuhan City: an application of Farr law' was posted on medRxiv (as a preprint and non-peer reviewed article) on 23 Feb 2020 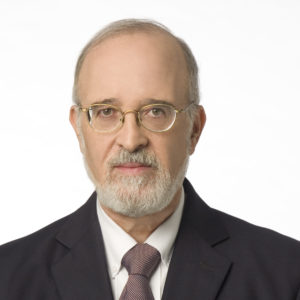 Isaac Ben-Israel is an Israeli military scientist, general and ex-politician. He currently serves as the chairman of the Israeli Space Agency and the National Council for Research and Development, under the auspices of the Ministry of Science, Technology and Space of Israel. He finished his service in the IDF ranked General, serving as head of the military Administration for the Development of Weapons and the Technological Industry. Between 2010-2012 he served as chief Cybernetics adviser to PM Netanyahu, during which period he founded the National Cyber Bureau in the PM office and launched the National Cyber Initiative. 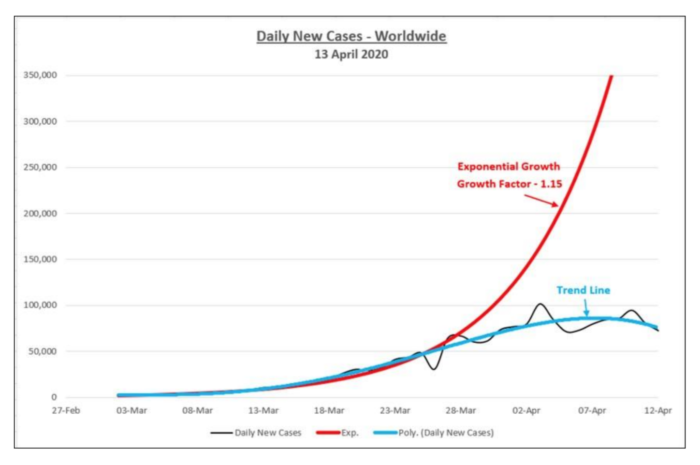 A prominent Israeli mathematician, analyst and former general Isaac Ben Israel claims that simple statistical analysis demonstrates that the spread of COVID-19 follows a pattern and resembles a curve. Prof Isaac Ben-Israel, head of the Security Studies program in Tel Aviv University and the chairman of the National Council for Research and Development, has explained the research he conducted with a fellow professor, analyzing the growth and decline of new cases in countries around the world, showed repeatedly that “there’s a set pattern” and “the numbers speak for themselves.”

He says the numbers peak after about 40 days and decline to almost zero after 70 days — no matter where it strikes, and no matter what measures governments impose to try to thwart it.

Click here to read the report published on Professor Isaac Ben Israel's calculations
3. Data analysis based on the SIR (susceptible-infected-recovered) epidemic model by the Singapore University of Technology and Design (SUTD)
The researchers at SUTD have used the "SIR (susceptible-infected-recovered) epidemic model" using the data from different countries to predict the key dates of transition during the coronavirus lifecycle across the globe. 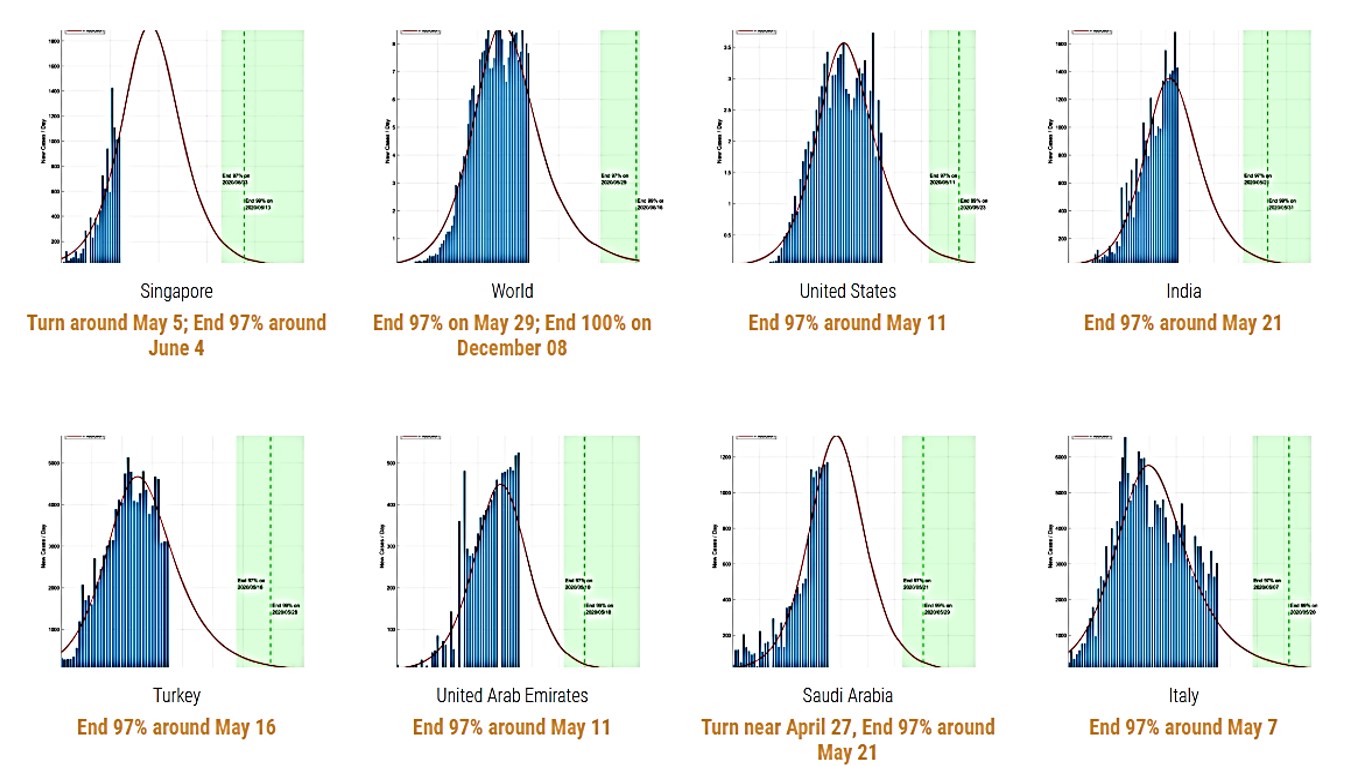 When Will COVID-19 End Data-Driven Estimation of End Dates (as of April 25, 2020, daily updated) by Singapore University of Technology and Design (SUTD), Data-Driven Innovation Lab

The SUTD has predicted through mathematical modelling that COVID-19 will end 97% in India around May 21. The model uses data from Our World in Data and applies the SIR Model for Spread of Disease, The Differential Equation Model. According to SUTD, the prediction is updated daily with the latest data and the analysis and predictions are only for educational and research purposes. They have also put a disclaimer that the report may contain errors. The model and data are inaccurate to the complex, evolving, and heterogeneous realities of different countries. Predictions are uncertain by nature. Readers must take any predictions with caution. Overly optimism based on some predicted end dates is dangerous because it may loosen our disciplines and controls and cause the turnaround of the virus and infection, and must be avoided.
Click here to read the article on When Will COVID-19 End Data-Driven Estimation of End Dates (as of April 25, 2020, daily updated) by Singapore University of Technology and Design (SUTD), Data-Driven Innovation Lab

LEIPZIG, Germany: UK health authorities have administered the first doses of the SARS-CoV-2 vaccine developed by Pfizer and BioNTech, and public health bodies around the world are now authoring policy documents that will determine which groups will be prioritised in national vaccination strategies. Currently, dental staff in Australia and the US state of California are set to be included in the first phase of local vaccination plans.

Editorial on Dexamethasone: Why Nano−Dexa formulations are the need of the hour in Covid times

Nano-formulations of dexamethasone administered either IV or via inhalation may help to improve COVID-19 treatment outcomes. This editorial summarizes how we can improve our Covid-19 treatment options further by potentiating the already established anti-edema activity and anti-fibrotic effects of free dexamethasone via nanomedicine.

Ankit’s back-zip PPE: A modification in the PPE to minimize the cross-contamination & virus spread

Healthcare workers (HCWs) spend a lot of time up working in close proximity to their patients, which is a high-risk activity. Standard Personal Protective Equipment (PPE) have been recommended for the healthcare setting, but donning and doffing of the PPE has its own challenges.  Clinicians and their assistants need to be careful while removing the PPE so that they can minimize cross-contamination. Dr Ankit Desai (Periodontist, Surat) suggests a small modification in the PPE design that can significantly reduce this risk.

WUHAN, China: The COVID-19 pandemic, which originated in Wuhan, has become a serious public health challenge of international concern. Researchers from Wuhan University School and Hospital of Stomatology have now released a paper which includes a number of recommendations for dental practitioners and dental students on how to deal with the virus SARS-CoV-2 that poses emerging and future challenges for dentistry.