A luminary in the field of periodontics Dr. Ray Williams - the former chair of periodontology, and Straumann Distinguished Professor at the University of North Carolina at Chapel Hill Adams School of Dentistry, passed away on October 28, 2021. Drs. Neel Bhatavadekar & Akshay Kumarswamy - two of his students, now well-known periodontists in India pay their tribute to their revered guide and mentor.

Dr.Ray Williams or Dr.Williams or just Ray was a giant among men - both literally and figuratively. The world knew him as an outstanding periodontal educator, researcher, and teacher. We, his students in the Periodontology Department of the University of North Carolina at Chapel Hill, knew him as our Department chair, a humorist, a lover of good scotch, and someone who wanted his residents to enjoy life while doing their residency. His late wife Joan and he used to open up their lovely home to us every Christmas. It was a pleasure sitting by the fireside while he used to regale us with funny anecdotes from his illustrious life. His slow, measured speech added to the crescendo of his jokes. 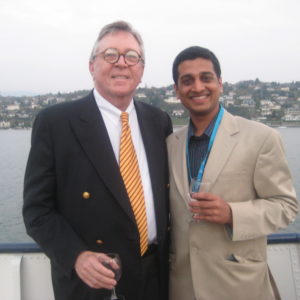 Dr.Williams would participate in our case discussions and journal article discussions. He used to bring a unique perspective based on his years of experience as an academician. We were blessed to have him there - someone who was later conferred with the highest award by the American Academy of Periodontology - The AAP Gold Medal. Not often does one get to sit and interact with someone of his personality and stature. He had a vast library at home and introduced a non-dental book club amongst us residents. He would pick a book and give it to us, and there would be a discussion after everyone had read it.

Personally, he was a father figure to me. I knew of him through his close friendship with my father but did not meet him until I joined UNC. He left UNC during my second year of residency to become the Dean of the Stony Brook University Dental School, but his personal touch came to the fore when I received a handwritten letter from him following up on my progress. I was deeply touched when he sent a copy of the kid’s book “Dr.DeSoto” as a gift to my newborn son Atharva. I am glad I shared a glass of the finest scotch whiskey with him in what would be our last meeting in 2016. Here was a man who touched lives across three generations.

Dr.Williams - I know you are in a better place and are happy to join Joan. I hope you get the finest aged scotch wherever you are. Cheers to your life and I will always be thankful that you were a part of my family and our lives.

Yesterday the world of Periodontics lost a star.

Ray Williams has left his legacy with many of his students, currently Deans, Chairs, and leaders in our specialty. Ray was a terrific mentor, philosopher, friend, and guide for me, right from the time of my residency at UNC-Chapel Hill (2004- 2007) to a few months ago, when we had our last chat. I am still coming to terms with it, but I remind myself to celebrate his life, ethics, and a quest for excellence. 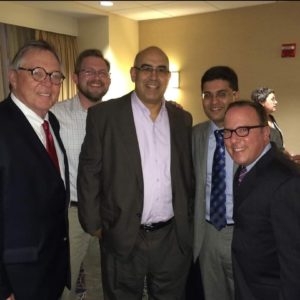 Prof Ray Williams was known for his charismatic ability to cut through communication barriers and relate to his peers and students 2-3 decades younger than him. He had a striking impact on the career development of all his students. He helped us readily connect with leaders in our specialty and industry, based on each student's area of interest.

I particularly remember him asking me to drive Prof Jan Lindhe home after a late dinner at Ray's home to ensure that I got enough face time with Dr. Lindhe. This ability of his to intertwine people led to a sense of a ' larger family' that one was part of.

Another attribute that I vividly remember was his approach to holistic education. He insisted that in addition to classical literature reviews, we also review non- dental novels, like 'Complications' by Atul Gawande, or similar books where students would understand the need to become compassionate with patients.

It is very rare to find teachers of his caliber, and more importantly, teachers who become so positively influential to so many. Ray, you will be sorely missed, but heaven just became a better place with you there!

His major research interests were clinical and translational research in both pharmacological modifications of the host response and in anti-infective approaches to treat periodontal disease. He also worked in the area of oral health-general health relationships.

Two students of grade 11 have developed an AI-based device called the Mouthscope to screen oral cancer and precancerous lesions & conditions, which ...

Iris Mittenaere, 24, hails from Lille in the Nord Pas de Calais region in northern France. She was crowned Miss Universe 2016 on Monday in Philippines. ...

LONDON, UK: Various organisations have undertaken to evaluate the quality of life of UK dental students during recent years, and particularly as students...

We summarize all the latest pieces of evidence on dental aerosol procedures. We also trace the evidence back to 2003 SARS times when the aerosols were ...

Increased esthetic demands, good mechanical properties, and ease of application have increased the use of composite resins in preventive and restorative ...

News Tue. 5 January 2021
DSD has evolved from a technique into a philosophy of modern esthetic rehab clinics - Dr Coachman

Christian Coachman, the founder, and CEO of the Digital Smile Design (DSD) company, is well-known for combining his advanced skills, experience, and ...

MELBOURNE, Australia: In an effort to deter people from smoking, cigarette packets are labelled with warnings and graphic images. In a new study, ...

News Sun. 31 May 2020
Dr Hirji Adenwalla - a pioneer in cleft surgeries in India, a great humanitarian and visionary

Dental Tribune South Asia pays tribute to Dr Hirji Adenwalla - an eminent cleft lip and palate surgeon who passed away on 27th May 2020. The man, who was ...

Dr. Vinay Kumar is a Maxillofacial and Oral Surgeon with a long association with ITI as a scholar and researcher. A renowned clinician, educator, and ...

BRUSSELS, Belgium/BIRMINGHAM, UK: Treat your gums” is the slogan for Gum Health Day 2022, a worldwide awareness campaign organised by the European ...