Editorial: Medicine vs Alternative Medicine: “If it works, it’s medicine; if it doesn’t, it isn’t”

This twitter thread is on a topic that will remain relevant forever : "Medicine vs Alternative Medicine". Most relevant to all those healthcare professionals who debate on different treatment modalities along the lines of Logical vs Illogical, Scientific vs Unscientific, Evidence-based or not, and Medicine vs Alternative medicine.

The thread starts with a tweet by Dr. Adam Cifu (MD, Professor of Medicine, Associate Dean for Medical School Academic, University of Chicago). He is the co-author of two influential books, Symptom to Diagnosis and Ending Medical Reversal.  Dr. Cifu also serves as a deputy editor of the JAMA Clinical Guideline Synopsis series.

Akk, I hate it when this happens. I have said almost this exact same thing many times and always thought it was so smart and original. This was published when I was 11. Oh well.@VPrasadMDMPH pic.twitter.com/BqBnbUORHs

Quotes in the thread:

1. We have to just find out what works. That's real science - it really does not matter what you call it. If it works, it's good science. Stated by Tim O'Brien

2. Quoting an editorial from Phil Fontanarosa and George Lundberg (JAMA 1998) "There is no alternative medicine. There are only two types of medicine. It is either scientifically proven, evidence-based medicine supported by data or unproven medicine, for which scientific evidence is lacking. Eastern vs western, mainstream vs unconventional etc are only for historical purposes and cultural interest. 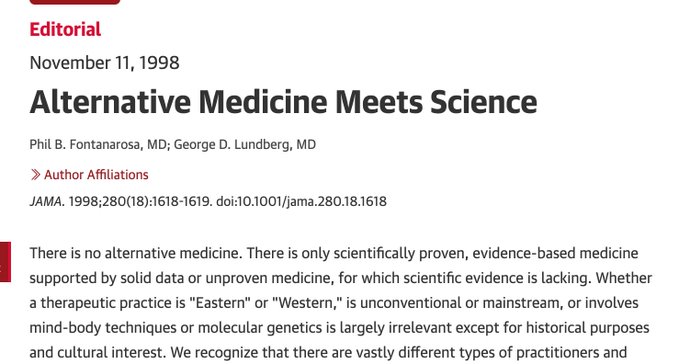 A tribute to Dr B S Bagi: A pioneer in forensic odontology & medicolegal research in India

Dr Baburao S Bagi (B.D.S, L.L.M) - a pioneer in Forensic Odontology and Medicolegal Research in India, left for his heavenly abode last week. Here is a heartfelt tribute to Dr Bagi from Dr Sameer Patil, Principal, Sinhgad Dental College and Hospital, Pune who had, in the early years of his career, had a close association with Dr Bagi.

'Farr Law' - an often ignored law in ­every epidemic hysteria - may throw some light on the pattern of epidemics including that of coronavirus (COVID-19) that is turning into a pandemic. A group of researchers from Shanghai Jiao Tong University School of Medicine, China and Rutgers School of Public Health, NJ, USA have developed a model based on Farr law using the data available on Feb. 8, 2020. They have analysed the data to predict the daily-incidence of 2019-nCoV infection in China, Hubei Province and Wuhan City afterwards. Will this model be accurate in predicting the rise and fall of Coronavirus (COVID-19)?

Dr. Bhavdeep Singh Ahuja graduated in 1998 from Punjabi University, Patiala. He has specialized in Implants from BioHorizons Inc. USA in 2004-05 & in Advanced Course from LACE-ICOI, USA in 2006. Apart from Dentistry, he holds a Triple M.B.A. in Hospital Management, Finance/Human Resources (dual) & Marketing from three premier Institutes/Universities of India viz. the IIMM Pune, IGNOU Delhi & Annamalai University, Chennai respectively. He also holds Post Graduate Diploma’s in Medical Law & Ethics (NLSIU - Premier LAW School of India), Clinical Research, Cyber Law, IPR's (Intellectual Property Rights), Disaster Management, Financial Management, Bioinformatics amongst many more from different Universities. He is a Certified Health Care Waste Manager from IGNOU & is qualified in Consumer Law as well. He is an academically oriented dentist & has more than 75 Original Scientific Publications to his credit in many International & National journals. He lectures all over India extensively on the topics of Practice Management, Medical Law, Ethics and Consent and Finance for Dentists and he is writing a series on all these topics in multiple journals simultaneously. He has been the Past Editor-in-Chief, L.E.D. E-Journal & PAGE 3 OLA-D E-Newsletter, the twin Publications of IDA Ludhiana Branch. Presently, he is into his 21st year of Clinical Private Practice in Ludhiana, Punjab.

NEW YORK, U.S.: In 2019, the Centers for Disease Control and Prevention (CDC) released a statement declaring that Candida auris is an emerging fungus that presents a serious global health threat. One of the main reasons that CDC released the statement was because C. auris outbreaks had occurred in health care settings.