A tribute to Dr B S Bagi: One of the pioneers in Forensic Odontology & Medicolegal Research, India

A tribute to Dr B S Bagi: A pioneer in forensic odontology & medicolegal research in India

Back to news India
By Dental Tribune South Asia
June 30, 2020

Dr Baburao S Bagi (B.D.S, L.L.M) - a pioneer in Forensic Odontology and Medicolegal Research in India, left for his heavenly abode last week. Here is a heartfelt tribute to Dr Bagi from Dr Sameer Patil, Principal, Sinhgad Dental College and Hospital, Pune who had, in the early years of his career, had a close association with Dr Bagi. 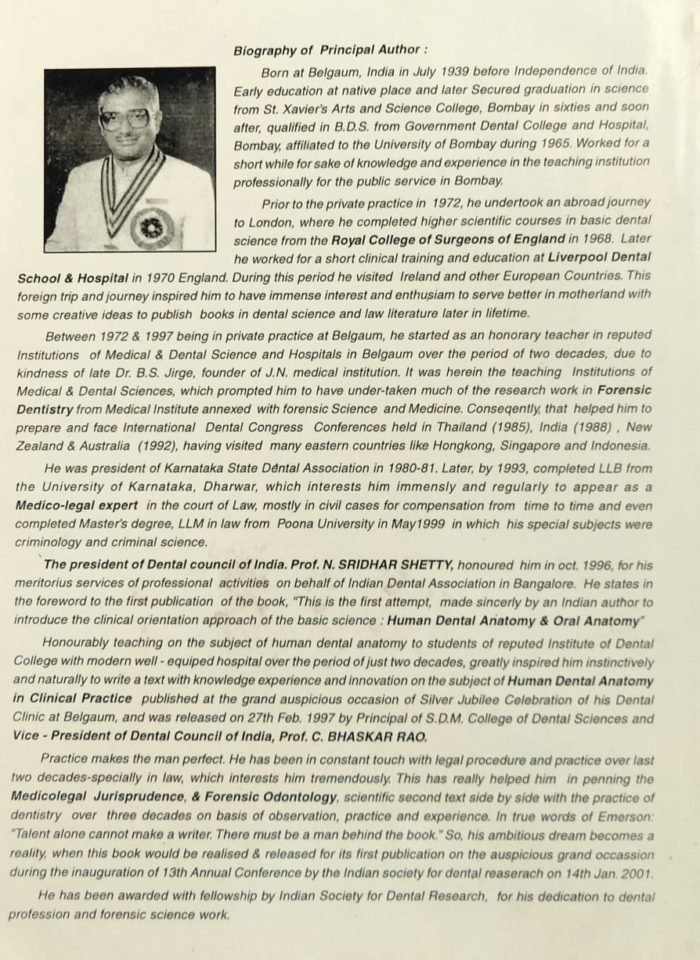 Dr Bagi was one of the pioneers in Forensic Odontology and Medicolegal Research in India, well known for his phenomenal work several national & international scientific publications for over 4 decades. He was also Orofaical Medicolegal Expert & Advocate for judiciary Compensation for Orofacial Assessment in Road Traffic Accidents.

It is with a sense of grief I am writing this about a person who was so passionate in everything he did. I remember him as an honorary teacher who taught us Dental Anatomy as well as Medico-legal issues, Ethics in Dental practice and Jurisprudence and Forensic Odontology. How relevant are these fields today! It only goes to remind us how ahead of times was he to have the expertise to teach these 30 years ago. I really am not sure whether or not he received any remuneration for the classes he conducted for us as he did for our senior batches as well as many junior batches after us at the then KLES' Dental College, Belgaum. This was in the late '80s and early '90s of the previous millennium. God! I'm feeling old now.

"Bagi Sir" as we addressed him, was a towering personality, a tall and solidly built individual with an equally strong booming voice...definitely none would miss this personality even in a crowded place. Add to this was an interesting sense of dressing, so typically his hallmark that you just cannot forget such personalities.

I still remember that day when I had just finished my MDS in Orthodontics at KLES' Dental College, Belgaum, he had sent a message asking me to meet him at his clinic. I was quite pleasantly surprised when he asked me if I would be interested to start consulting in his clinic for Orthodontic cases. It was my first offer for Consulting and I had gladly accepted it. And it was during these few years of my interaction,  I confronted a person so very different from all the notions and perceptions we carried about him as a person. It was definitely a revelation to me then to note how humble he was! A quality individual,  a concerned dentist, an empathetic doctor and more importantly a great human being. Apart from his bachelor's degree in dentistry, he had a qualification in law and had undergone speciality training in Forensic Odontology. It was at his persistence, I became the Founder Life Member of Indian Association of Forensic Odontology.

He was also a very active member of the Indian Dental Association of Belgaum Branch and served in varying capacities including as a President. He was active in the Karnataka State Chapter of IDA as well and was a very good organizer of conferences and Scientific meets.

A very versatile individual...indeed he was! He had a typical practice, with mostly patients from nearby villages thronged his clinic. And they used to carry their produce from the farms to supplement any shortage of money they had towards treatment, which Dr Bagi whole-heartedly accepted knowing their inability to pay.

Overall, a great human being that he was...he has raised a wonderful Son, Dr Manish, another wonderful,  down-to-earth, extremely polite and well-behaved kid who followed his father's footsteps to become a Dentist himself.

All these memories are flashing by and I can see him gleaming and flashing a beaming smile as usual.

Heaven can be the only place for such souls.

Herd immunity is a key concept for epidemic control, which states that only a proportion of a population needs to be immune to an infectious agent for it to stop generating large outbreaks. We can achieve herd immunity through two strategies: by overcoming natural infection or through vaccination.

Antibody testing for SARS-CoV-2: “We need to talk more about it”

LONDON, UK: Despite dental settings presenting a significantly elevated risk of infection for those in and beside the chair, testing patients for the SARS-CoV-2 virus remains optional. Those advocating for testing say that it would help to keep dental practices safer, to reduce the amount of personal protective equipment (PPE) that clinics use, and to streamline appointment scheduling and treatment. A number of options are available, and one UK doctor is advocating for antibody tests for dental practices.

For the Young Dentist: 5 steps to stand out in the post-Covid world through strong online branding

Dr Kumar Anshul (BDS, MBA), who has leveraged social media & personal branding to his advantage at multiple times during his professional journey, gives tips for the young dentists on how they should establish their brand using some of the best tools available online.

Dr Ajay Kakar, a periodontist from Mumbai well known for his innovative approach to dentistry and also known as a pioneer in the use of technology and software for dental practice management in India gives his practical recommendations to prevent cross-contamination in dental clinics. He was one of the earliest (the first in India, probably) to make a No-Spittoon dental clinic.